Welcome to the M.V. Spares Blog

Do your rain shields short out? 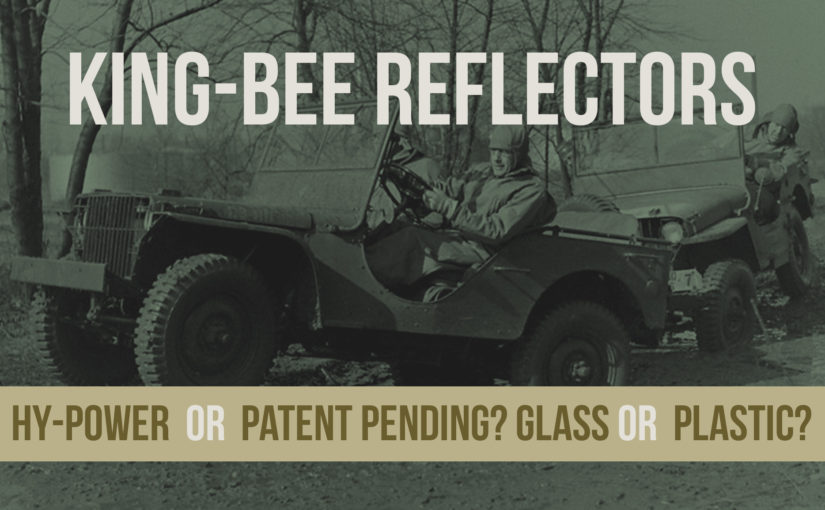 There has been much information offered on this subject over recent times, some informative, constructive and historically correct, unfortunately some has been incorrect. We will attempt to provide sustainable data thus allowing the end user to make their own decision in an informed manner.

I have owned four (4) GP’s over the past 40 years and the first was by today’s standards a reasonably complete and original GP and it was fitted with “King-Bee Pat Pending” reflectors. An approach was made to various individuals well known in the trade, in the USA and the UK and they kindly provided original samples from their collections.

Consideration might well be given to the huge buying power and indeed volume purchasing principles of Ford who apart from using King-Bee reflectors on GP’s were also using them on other Ford Trucks. It is reasonable to assume Ford would hold large stocks as would Dodge, another substantial vehicle manufacturer using King-Bee reflectors. The “King-Bee” manufacturer being involved in volume production would themselves have stock to rotate before new molds were produced and production of “King-Bee Hy-Power” put into effect.

One can conclude that both “King-Bee Pat Pending” and or “King-Bee Hy-Power” were used on GP’s and many other Ford and Dodge trucks. One should also be aware that there are two distinctly different “King-Bee Hy-Power” markings on such lenses and there is no evidence as to production dates.

There is no such thing as a Ford GP or Dodge reflector, just a commercial reflector purchased from external vendors and used by those manufacturers. The lenses were glass, plastic lenses were never used and are totally incorrect. An aluminum reflector plate and cork cushioning ring were installed during assembly.

Restorers should be aware that the mounting holes sizes were different for various vehicle manufacturers, the Ford GP used #10 size round head screws whereas the Dodge trucks used larger #12 screws so the holes in the Bezel will vary.

The choice of which reflector to use is clearly up to the individual and their decision will reflect their own preferences or interpretation of the data available and the quality of the reflector assembly on offer.

One thought on “King-Bee Reflectors”